Last week we spent three nights in Niagara Falls, on the Canadian side. The Niagara River forms a boundary between the US and Canada.

People have been drawn here for centuries, whether to fish, hunt, trap, stand in awe close to or behind the falls, or watch daredevils walk on wires above or ride barrels down the falls.

There are actually three falls along the Niagara River:

1. American Falls (we didn’t see this one)

One day we rode our bikes down through Clifton Hill’s Street of Fun which T’s into the linear park across from the Bridal Veil Falls and the Horseshoe Falls. (About 4 miles)

Here’s a map of the area from the N.F. (Ontario) visitor bureau:

I was horrified how schlocky Clifton Hill was. Haunted Houses, Rides of Terror, Waxed figures, Escape Rooms, and trinket shops.

Again, here’s a print screen of Clifton Hill from the Visitor’s Bureau’s guide:

The First Nations have been multiply injured:

First, the Canandaigua Treaty of 1794 that the Haudenosaunee, also called the Six Nations Iroquois Confederacy, signed with the U.S. government gave them rights in perpetuity to the falls and much of New England and the great lakes areas. It was not abided by.

A hydroelectric powerplant was started in 1957, and three years later (!) the US Supreme Court approved the (already) taking of 550 acres of the Tuscarora (one of the six nations) reservation. Robert Moses, autocratic head of the NY Power Authority and director of the plant construction is still the villain in this saga. And the Supreme Court is the other villain.

Second, the area (both sides) is very commercialized and a terrible “frame” through which to view the falls. It violates Nature.

Third, the falls only have 25% of the water from the Great Lakes flowing over them. 75% is diverted via tunnels to hydroelectric dams.

Fourth, Native Americans used to sell their beadwork to visitors to supplement their meager income. That’s not happening any more.

I took pictures of the two Falls. The noise and spray from the walk way were awesome. 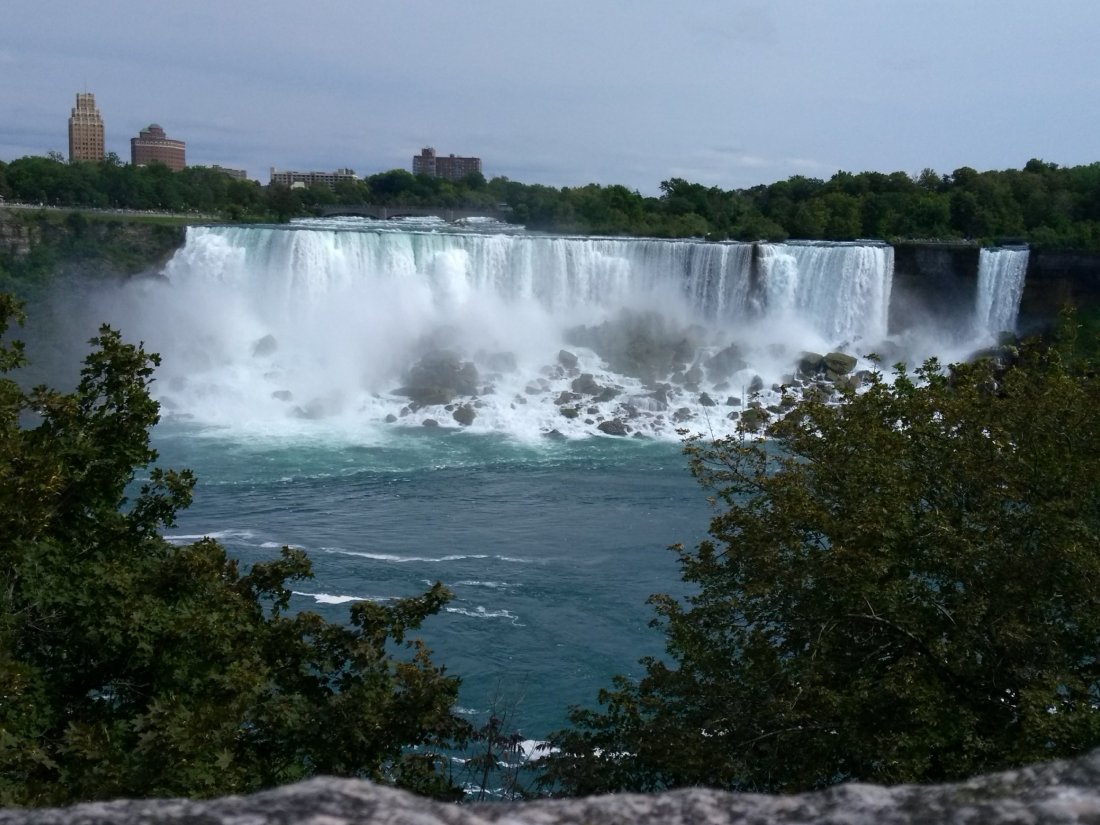 The above pic is Angel Falls. 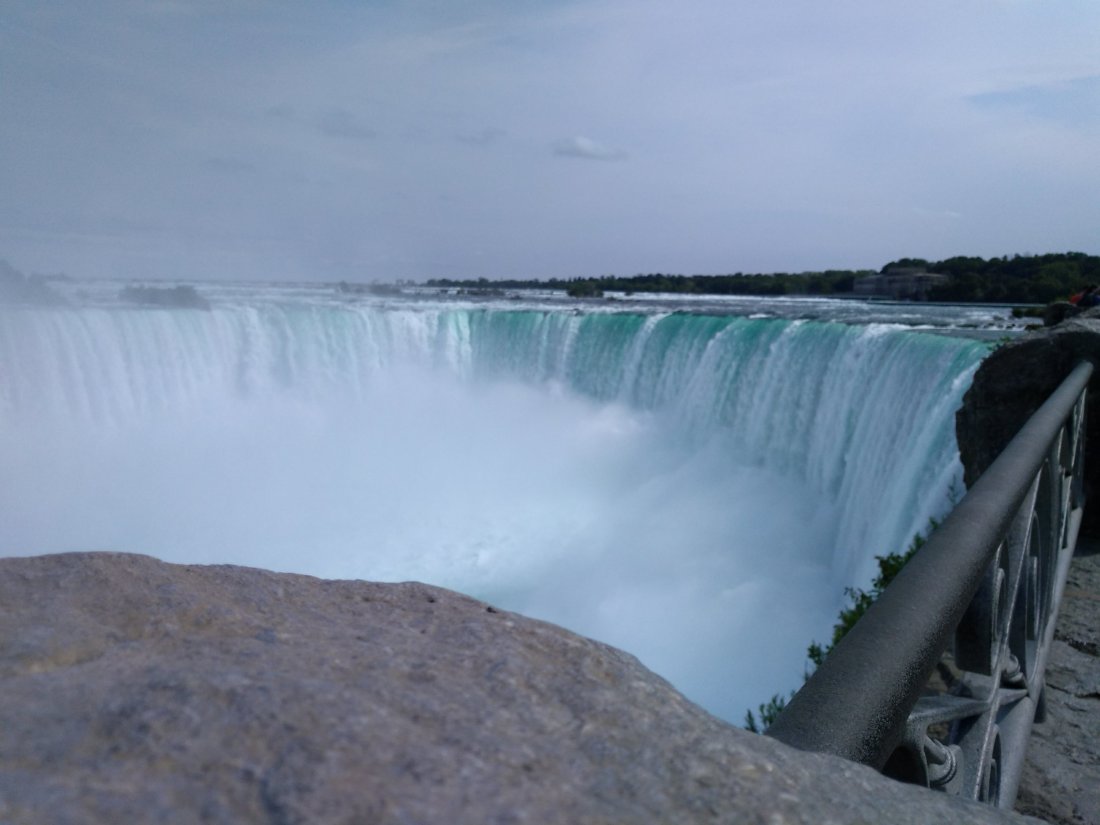 The above pic is the Horseshoe Falls.

Here’s a pic of one of the sightseeing boats that take visitors into the spray field. This company is Maid of the Mist. 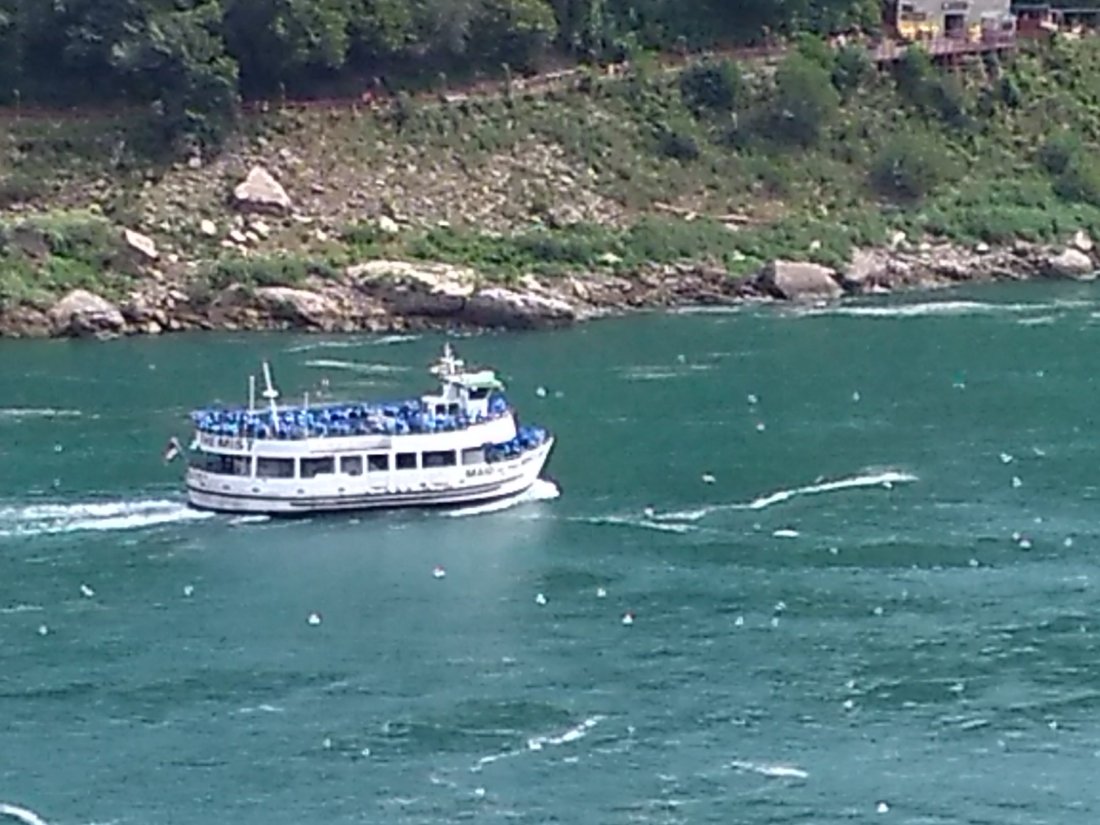 The Six Nations object strenuously to this name and the story it purportedly tells.

Here’s a paragraph I copied from the website https://bandbNiagara.com:
The “standard” Maid of the Mist story that is commonly told in Niagara today is not actually a Native American story at all. It was, apparently, the invention of a 19th century European anthropologist. Its themes of cruel gods and human sacrifice are alien to the Six Nations people.

So, the First Nations are slandered as white corporations rake in the dough. So wrong!

My next blog entry will be about a traveling exhibit we saw at the Niagara Falls History Museum.

I have two grown children and a loving, supportive husband. All of us have an itch for travel and the enrichment that goes along with that. View all posts by theresavsimonson